Rhythmic stimulation of the human body combined with ritual body postures can produce a profound change in consciousness, enabling one to experience different areas of the alternate reality.

Ritual body postures found in prehistoric cave paintings and indigenous effigies have their origins with the hunter-gatherer tribes. The oldest posture discovered to date is believed to be approximately 32,000 years old. It was in the horticulturalist societies that followed, however, that the practice of these postures flourished.

Prof. Dr. Felicitas D. Goodman (1914-2005), was a highly regarded expert in linguistics and anthropology and had researched and explored ritual body postures for many years. She is the author of such well-received books as Speaking in Tongues and Where the Spirits Ride the Wind: Trance Journeys and Other Ecstatic Experiences.

Dr. Goodman and many people of the Cuyamungue-Institute (USA) and the Felicitas-Goodman-Institut (Germany) have collaborated in researching the effects of eighty different ritual body postures. Each body posture can lead into the alternate reality – or a different field of consciousness – when performed in conjunction with the proper rhythmic accompaniment of ca. 210 b.p.m.

The finding of the effects or the ritual body postures started with Dr. Goodman’s research in the 1960ies on glossolalia (speaking in tongues). This technique as a component of religious trance rituals led her to wonder whether it was possible to achieve the bodily changes of a religious trance experience without the accompanying changes in speech. With her university students as test subjects, she employed some of the methods (e.g., rhythmic stimulation) that she had observed were trance inducers in her earlier research in apostolic churches in Mexico. 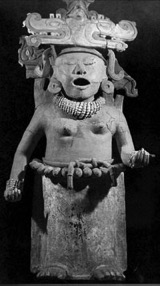 Although her students reported success in achieving “an altered state of consciousness,” Dr. Goodman was disappointed with the noticeable lack of common ground of the experiences. Shortly thereafter, she hit upon the missing ingredient that would give unity to religious trance experiences. After learning that the posture of the body in meditation practices could cause certain physiological changes, Dr. Goodman searched for postures that she could use in her trance research. She found what she was looking for in pictures and illustrations of small statues and cave art that were thousands of years old and that probably represented self-contained religious rituals. In practicing some of these body postures with volunteers and using a rattle as the rhythmic stimulus to induce trance, Dr. Goodman observed that their state of consciousness was altered in a remarkable way; that is, they entered a trance-state that provided a gateway into the alternate reality, where they experienced ecstasy. The rattle’s (or drum’s) 210 beats-per-minute rhythm helps to break through a strategic barrier of the nervous system and achieve a changed state of consciousness, one that allows a trance experience, including visions. The saying „He who sees only with his eyes sees only the shadows of the world“ reflects a wisdom that is deeply anchored in many indigenous cultures.

Most of the investigated trance postures come from the hunter-gatherers and the horticulturalists. These societies did not separate „ordinary reality“ from „non-ordinary reality“ as we do today. The trance state was socially acknowledged and accepted as a method of balancing body, mind, and soul and of bringing back into harmony that which had caused dissonance.

Body postures that lead to a trance state are still being practiced in societies that are rooted in the horticulturalist tradition. In anthropologist Erika Bourguignon’s comparative study (1973) of 488 societies around the world, 437 (or 90 percent) were found to use at least one culturally institutionalized method to experience an altered state of consciousness. The Hatha-Yoga asanas also have their roots in the ritual body postures of shamanic cultures. 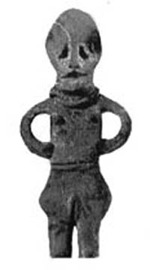 This alone is not sufficient to explain why that in spite of all changes of the form of society, language and culture the knowledge of shamanic practises and the interest at these methods did not vanish. How comes that in our time which is full of stimulations of the senses and has all kinds of self experience practices more and more people are looking for the shamanic experience and techniques? Why do people search for the experience of not visible worlds of consciousness, looking for the experience of flying without having wings, changing form and getting insights by their own experience and not only by faith? Don’t we have enough possibilities of „real“ travelling and flying to open up for lots of experiences?

What can shamanic techniques like the ritual body postures and ecstatic trance offer to us which the „real“ outer travels cannot?

Intentional effected shamanic experiences of altered states of consciousness can be full of lust (pleasure is too weak), they can be healing and insightful, can bring into the experience to be oneself and the whole at the same time. These experiences are possible after a little training for everybody who dares, they are without dogma and preconceived dependence to gurus, enlightened people or masters.

Further to this is the embedding of the shamanic methods into rituals and the worldview of natural processes and awe for nature, of the soulfulness of all which exists.

Those, who have had such an experience, i.e. that all life is one, that everything is interwoven and interconnected, those people are able to live a more intense life in the everyday reality. They get the feeling of independence of the material world, of time and space, of the existence of a personal „Self“.

This website uses cookies to improve your experience while you navigate through the website. Out of these, the cookies that are categorized as necessary are stored on your browser as they are essential for the working of basic functionalities of the website. We also use third-party cookies that help us analyze and understand how you use this website. These cookies will be stored in your browser only with your consent. You also have the option to opt-out of these cookies. But opting out of some of these cookies may affect your browsing experience.
Necessary immer aktiv
Necessary cookies are absolutely essential for the website to function properly. This category only includes cookies that ensures basic functionalities and security features of the website. These cookies do not store any personal information.
Non-necessary
Any cookies that may not be particularly necessary for the website to function and is used specifically to collect user personal data via analytics, ads, other embedded contents are termed as non-necessary cookies. It is mandatory to procure user consent prior to running these cookies on your website.
SPEICHERN & AKZEPTIEREN